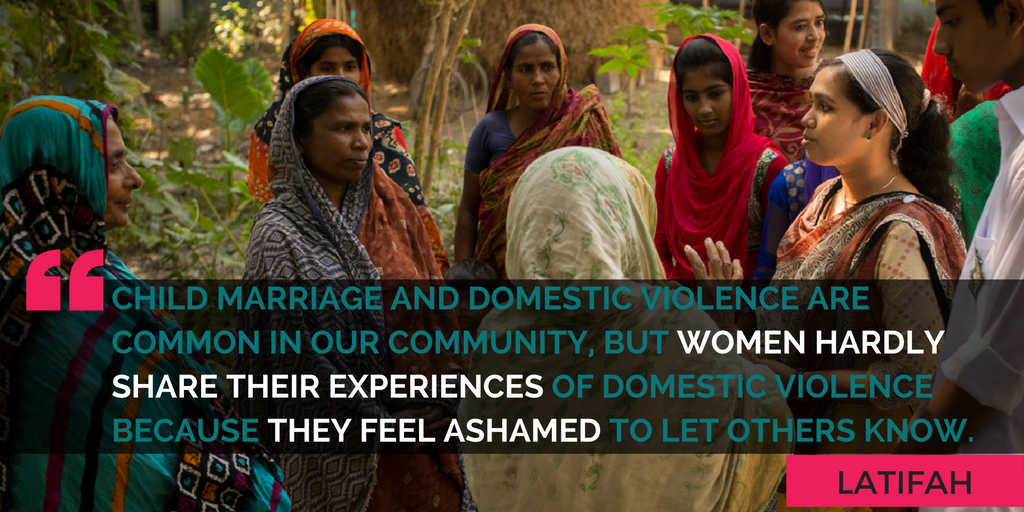 For the 16 Days of Activism, “Girl Connected” Latifa’s call to action is to break the silence around domestic violence. A student and a community activist, Latifa works tirelessly to raise awareness about domestic violence and child marriage in her community.

In Bangladesh, as many as 65 percent of married women suffer physical violence at the hands of their husbands. In most cases, women are forced to remain in abusive relationships or marriages. Women are often financially dependent on their husbands, unaware of their rights, and forced into silence because of the shame attached to speaking out publicly. Around the world, there are multiple barriers for women to report or even talk about domestic violence. In a context where 1 in 3 women in the world have experienced physical and/or sexual violence, giving women and girls an opportunity to tell their own stories on their own terms is key to change.

Women and Girls Lead believes that stories can inspire breakthrough conversations about issues that are otherwise difficult to talk about. Like us, Latifa is also engaged in empowering women to tell their own stories.  She says,  “I am sure, in the future, women will be more courageous to speak out about the humiliation and torture they have been facing from husbands, in-laws, fathers and their brothers.” In the meantime her call to action for us is to create a world where women feel safe to voice their concerns. Are you ready to support women’s voices? Tells us your plans on Facebook or Twitter using the hashtag #GirlConnected!

Follow us and be the first to catch the online release of Girl Connected in March 2017.