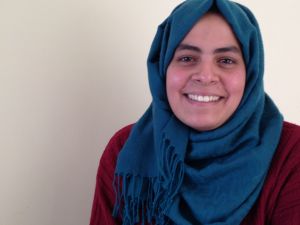 A few years ago, Hiba Al Nabulsi proposed to her father that she spend after-school time learning media and technology skills.  At first, he was resistant. “I was 16, and there were boys at the Clubhouse,” she says, referring to the Intel Computer Clubhouse Network, a community of computer clubhouses focused on equipping young people with media and technology skills and resources. “I had never participated in mixed-gender activities.”

Eventually, however, her pleas wore him down and he relented.

The short film that Hiba submitted to garner the prestigious award, “Meter by Meter”, was produced last summer for a Youth Film Contest organized by WGLG’s campaign in Jordan, “I Have a Story”, and WGLG’s NGO partner, JOHUD (The Jordanian Hashemite Fund for Human Development), which works to end gender inequality by encouraging women to play active roles in their local democratic processes and in their daily lives.  The contest challenged young people to produce a film that addressed the campaign issue of gender discrimination and violence.

Mays Zaneh, a country engagement coordinator for WGLG’s “I Have a Story” campaign in Jordan, explains that the goal of the contest was “to introduce GBV awareness in a new and creative means to encourage the largest share of youth to participate.” Mays explains that she and JOHUD wanted the contest to give youth an opportunity to express their own thoughts about gender-based violence through creative means such as filmmaking and digital media. The Intel Clubhouse management, as well as Hiba’s family, recognized the work and effort Hiba had put into “Meter by Meter”, and encouraged her to apply for the Adobe Youth Voice Awards.

“Meter by Meter” is a poignant and creative display of the many ways that girls face inequality throughout their lives, starting at birth, and continuing as they get older and limits are placed on their freedom to study, work, and plan their own lives. “I wanted to portray the challenges of being a girl, but I wanted to do it artistically,” says Hiba. “Girls have it hard. We need permission before we do anything, and we encounter harassment just for being ourselves. It’s difficult even to be sweet and kind, to smile, without being sexually harassed.” Hiba came up with the concept for the film and directed it, as well as putting together a team of four other young people to collaborate with her on the production. The film was awarded first place in the Youth Film Contest, which solicited votes on social media.

“When my father watched the film for the first time, he cried,” says Hiba. “I think he was proud, he didn’t know I could create something like this,” she said.

“I think the ‘I Have a Story’ campaign awakened something in me,” Hiba says. “Now, everywhere I go and everything I see, I envision a movie. I don’t know how I’ll find time to make all these films – but I think I’m on the right path.”