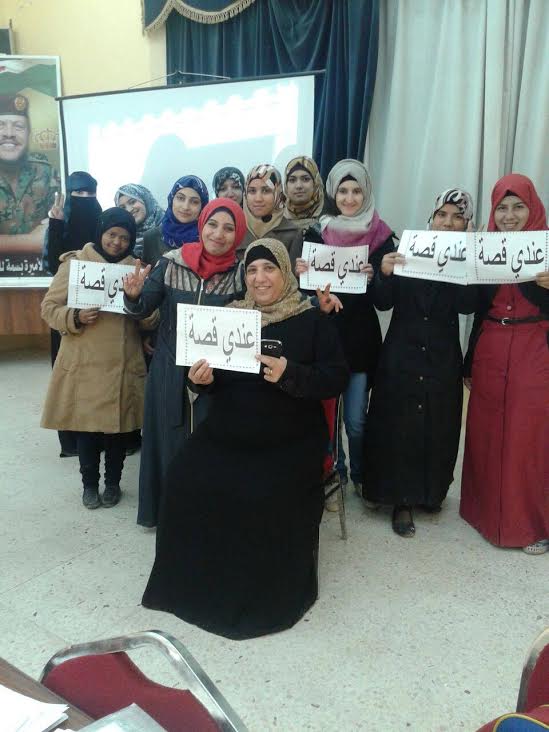 Worldwide displacement has reached an all-time high with war and conflict forcing almost 60 million people around the world to migrate. After 2011, the Syrian Civil War alone has claimed over 220,000 lives, and displaced or killed more than half of the pre-war population. Since the beginning of the conflict, Jordanian communities have welcomed almost 1.5 million refugees from Syria, a neighboring country they have shared a strained relationship with in the past.

As the migration crisis escalates, the need for a conversation about its impact on communities has become absolutely urgent. At a time when Ma’an, a city in southern Jordan, grapples with the complexity of hosting over 7,000 Syrian refugees, WGLG facilitator Kawkab decided to screen a film about a different conflict-affected community on the other side of the world. The documentary film Sweet Dreams is a passionate story about women survivors from both sides of the Rwandan genocide who overcame their differences to form the first and only drumming troupe in the country, and later went on to open Rwanda’s first ever ice cream shop. The film was screened as part of WGLG’s “I Have a Story” campaign that uses home-based film screenings to offer a safe space to discuss sensitive issues like gender-based violence.

During the discussions at the film engagement events, many women were struck by the way the women in the film were able to overcome their painful history together, and challenge the traditions that banned women from playing drums. Attendee Um Omar, a housewife from Ma’an said, “War led by extremism in Syria made me watch over my children and make sure they are not circulating the vicious crimes and extremist discourse that’s taking place in Syria and Iraq”. Many other women agreed with her conviction that mothers need to guide their children away from extremist ideology.

These women believe mothers can teach their children from an early age to love their country and keep it safe, because that is where they will grow up, start their families, and have their future. Sumaya, another member of the group, said “In war, women and girls are more vulnerable to violence and abuse.” She added, “but women are also peace messengers because they can tolerate differences better than men and resort to non-violent solutions to protect themselves and their families.” Through the window of a powerful film, these women have found inspiration in the stories of women on the other side of the world, helping them see their own potential to perpetuate peace in their families and communities.