“We had neighbors who opposed me riding a bike… Ma  told them how my bike and I saved my brother’s life.”

You may recall the heartwarming Saudi film Wadjda that met audience affection and inspired girls everywhere when it was released in 2014. Groundbreaking filmmaker Haifaa Al-Mansour told the story of a bold young Saudi girl who schemes and saves to buy herself a beloved green bicycle. Despite the objections of their more conservative neighbors, Wadjda’s mother fights for her daughter’s right to ride. Almost 3,000 miles away in Bangladesh, we met a real-life Wadjda, only her bicycle was red. 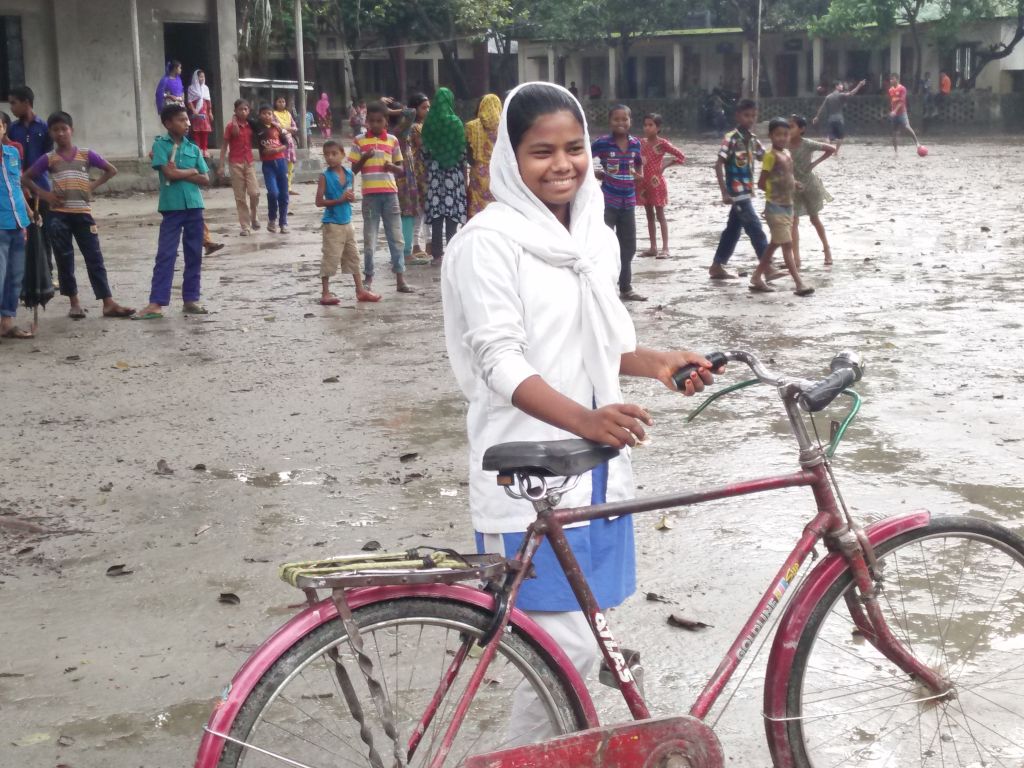 In Bangladesh, distance to school is a major barrier to girls education. Students in rural areas have to walk for miles to get to school. Parents’ concerns about sexual harassment and violence on the road often leads them to pull their daughters out of school. WGLG’s Best School for Girls (BS4G) campaign recognizes the link between girls’ safety concerns and dropout rates, and works with students, parents and school authorities to make schools and communities more girl-friendly. We believe the best solutions to the various barriers facing them emerge from the students themselves – and for girls, bicycles have become a popular solution. BS4G schools are encouraging parents to buy bicycles for their daughters and creating training groups where girls teach each other how to ride a bike.

Want to know more about how girls are riding their way to an education? Meet Sumaiya Sumi, grade nine student at Alam Biditor High School- a BS4G school in Bangladesh, who rides a bike to school everyday. Her old red bicycle might look a little too large for her but she rides it everywhere. She even has a name for it- Phoenix! Sumi’s Phoenix is not just a bicycle, it’s her connection to an education. But for a young girl like Sumi, riding a bike in a fairly conservative region like Gangachara, presents it’s own set of challenges. Here’s her story: 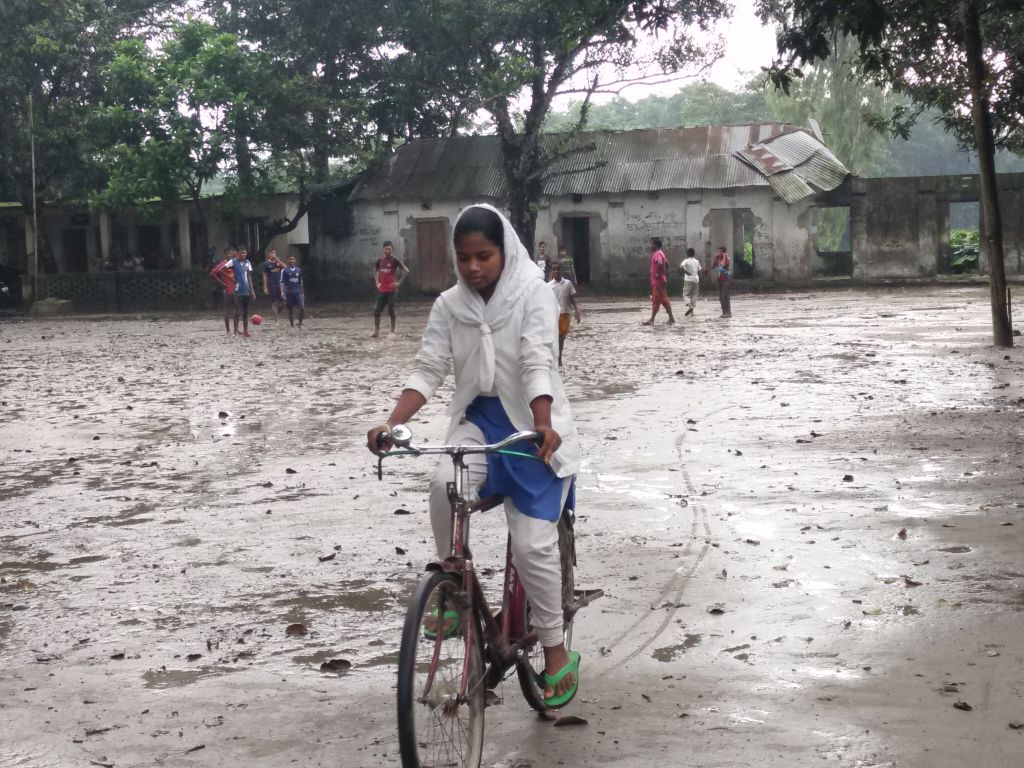 Sumi on her Phoenix

I used to watch boys ride bicycles to school. They were fast, they were on time, while I was late on most school days. I had to walk 3.5 kilometers to school every day, rain or shine. Then one day, I asked my good friend, Romij, to teach me how to ride his bicycle. Fortunately he agreed. I loved riding a bike! I could ride for a long time and I became so passionate about it that I wanted to have my own bicycle. My parents refused to buy me one, but I was adamant. I saved my lunch and stipend money, gathered taka 2000 ($25) and gave the money to Baba. I asked him to buy me a used bicycle with the money. He finally gave in and the next day we went to a nearby shop to see if they had any used bicycles. Luckily, we found one. It was a bit big for me, but I convinced Baba that it was exactly what I was looking for. We couldn’t buy the bike that day, since the money we brought with us wasn’t enough but we gave them an advance and asked them to keep the bicycle for us till the next morning. I was the happiest person in the world, I named my bike Phoenix!

Later that night before dinner, our Huzur (Imam at the local Mosque) came to our house. He had seen us at the shop that evening, bargaining for the bicycle. He was trying to convince Baba not to buy the bike for me. I heard him say, “she is all grown up, who will marry a girl who rides a bicycle. It is a completely boyish thing to do, and good girls don’t do such things.” When Huzur left the house I heard Ma tell Baba that maybe he shouldn’t buy the bicycle for me. I wept all night.

I woke up late next morning to a complete surprise – I found the bike leaning against the wall of my room. O Allah! I couldn’t believe it, I rushed to Ma and hugged her tightly. Ma was laughing and made me promise not to ride the bike outside our house. But one day when Baba wasn’t home, Ma asked me to go to the market to get a saline packet for my young brother who was seriously ill. From that day on I started riding my bike to school and to the market. Now, anywhere I go, I go with my bike.

Sumi and her classmates with their bicycles

We had neighbors who opposed me riding a bike, they came and talked to Ma about it but she told them about the benefits of it. She told them how my bike and I saved my brother’s life by getting a saline packet from the market on time. My teachers and classmates on the other hand have always encouraged me to ride my bike. My teachers even asked me if I could teach other girls how to ride one. I’ve already finished training ten girls and now I’m trying to teach two new girls .

My bike never gives me any trouble. I repair it, change it’s parts if needed. It has made my life so easy. I haven’t been late to school since I got the bike. It saves me from the unpleasant experiences that other girls might face on their way to school.

Thank you my Phoenix!