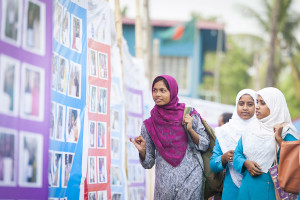 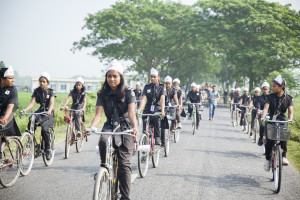 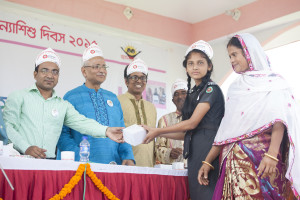 Early on the morning of October 11th, 100 girls mounted bicycles and began pedaling down a rural highway in Gagni, Bangladesh. Flanked by hundreds of community members who cheered them on and kept the traffic at bay, they rode five kilometers to Jorpukuria High School to celebrate International Day of the Girl. “When the Best School for Girls campaign launched two years ago, no girls in this community rode bicycles. It was not considered appropriate,” says Women and Girls Lead Bangladesh Country Coordinator Mahmud Hasan, who launched the Best School for Girls campaign. Last year, encouraged by the campaign’s goal of making schools more girl-friendly, Jorpukuria began training girls to ride bicycles. Today, about 300 girl students ride bicycles to school on a regular basis.

When the girls reached the school, 2000 students, parents and teachers were gathered to take in the celebration’s main attraction: a display of 500 family photos. Each photo portrayed a young girl and her parents, coupled with an expression of her parents’ vision for her future. “I would like to see my daughter become a policeman,” read one photograph. “I pray for our daughter to become an engineer,” read another. Other parents shared dreams of their girls becoming teachers, doctors, and political leaders. Twenty photos were awarded prizes for quality, composition, and articulation of an inspiring vision.In challenging families to take their own photos and express a wish for their daughter, the  BSFG campaign was encouraging parents to consider their daughters’ great potential – as well as the way that early marriage would inhibit that potential. This goal was reinforced during an oath-taking ceremony at the event, led by chief guest Dr. Badiul Alam Majumdar, President of National Girls Child Advocacy Forum and Country Director of The Hunger Project Bangladesh.

“Let’s make a promise today that we will not marry our girls off before their 18th birthday and that we will invest more in our girls education,” Dr. Majumdar’s said, urging the hundreds of parents in the audience to take the pledge with him.

In his keynote speech, WGLG Bangladesh coordinator Mahmud Hasan reminded the audience about the current child marriage situation in Bangladesh – and the impact that the Best School for Girls campaign is having on the situation. In Gagni, for example, at the campaign’s 49 partner schools, there is a 30% prevalence of child marriage, compared to a 71.5% rate of child marriage district-wide. Hasan saw the community’s enthusiasm around the IDG event as an affirmation that this kind of progress will continue.  “I am overwhelmed to see such a big crowd to celebrate a day that is dedicated to girls,” said Hasan. “This celebration shows that we care about our girls – and this care will surely fade away child marriage from our society very soon.”