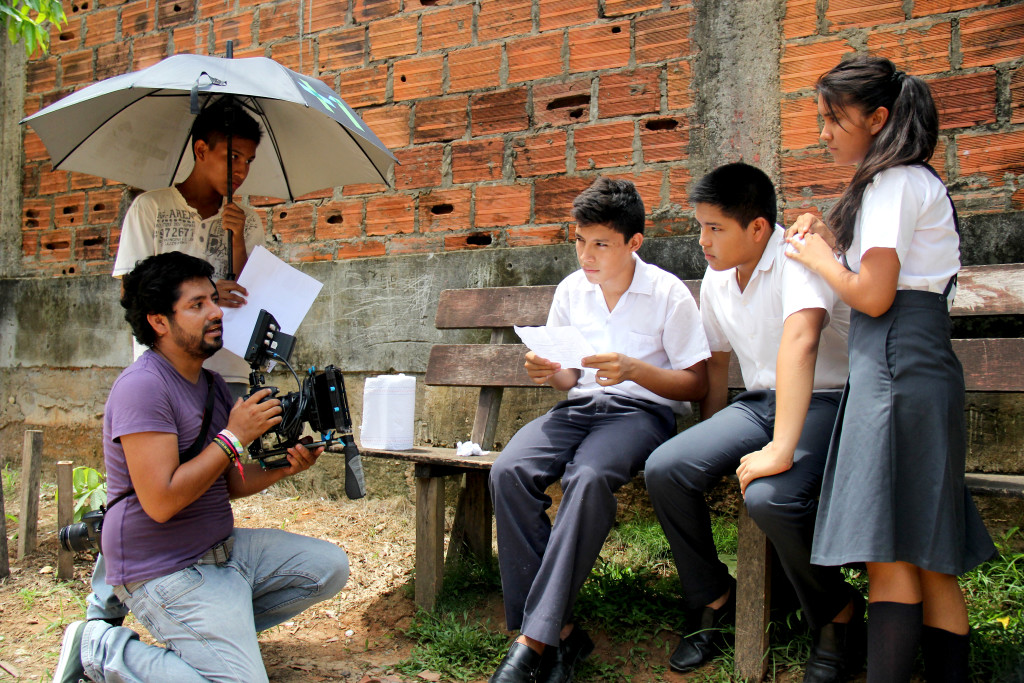 When one teenager is faced with an unplanned pregnancy, and another is struggling to financially support his family, what are their options? They can either choose the seemingly easy route and drop out of school, or they can stay in school in hopes for a better life for themselves and their families. The protagonists of Don’t Back Down (roughly translated from the Spanish title of the film, Sin Arrugar), choose the latter and make the difficult, but rewarding decision to stay in school.

Don’t Back Down premiered in Pucallpa, Peru on April 9th to recognize the talented Peruvian teenagers who directed, wrote, and produced the film. While the audience included high level dignitaries and decision-makers, all eyes were on the young producers. Local Peruvian media were there, eager to interview the stars of the event who had spent hours perfecting their red carpet looks. The film was a participatory film project, produced by young leaders from Pucallpa, with help from WGLG Peru partner PCI Media Impact. Youth producers learned on the job, as they spent months eliciting stories from their peers, writing powerful scripts, acting, directing, filming and editing.

The premiere was a chance to gain visibility for WGLG’s campaign in Peru, “Ahora es Cuando”, or “Now is the Time”, to share the process behind creating Don’t Back Down, and to connect with television stations to get the film out into the world. Not only was the film successful in giving a voice to countless young people across Peru in their struggle to transition to adulthood, it has continued to build momentum since its red carpet premiere. The Municipality approached the WGLG Peru team about using the film in seventeen health centers throughout the region to educate the public about teen pregnancy and reproductive health. The Local Development Department of the Municipality is organizing film screenings of Don’t Back Down in local schools as a way to educate youth about these issues. Several NGOs have also requested to use the film as a tool to support their sexual and reproductive health advocacy efforts. Government agencies and NGOs alike have seen the potential in Don’t Back Down as an effective educational tool for change.

In addition to film screenings, “Ahora es Cuando” is planning an advocacy contest with partner schools that will encourage youth to create media that raises awareness about the issue of teen pregnancy. According to Kathrin Pfeiffer, Country Engagement Coordinator for “Ahora Es Cuando”, the goals of this advocacy contest are “to create a platform where young leaders can express their creativity and build content to raise awareness about this issue, to encourage the participation of young leaders so they can make their organizations visible in our social networks, and to broaden the audience of our campaign in social networks.” Watch for the campaign on social media, as the youth contestants share their creative ideas and encourage healthy decision-making among their online peers.