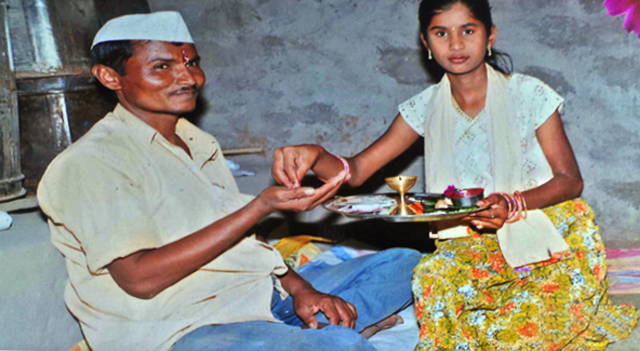 Bhagwat Thorat pulled each of his three daughters out of school when they reached puberty, fearful that if he waited too long to find them husbands they would have fewer prospects, that they would become victims to sexual violence, or if nothing else, that his investment in their education would end up benefiting the husband’s family and not his own.

After attending a film screening of The Revolutionary Optimists organized by Women and Girls Lead Global (WGLG), however, he came to a new conclusion. Watching a character named Sikha – an 11 year old girl from a Calcutta slum – deliver a compelling presentation about girls’ education in front of a large crowd in Delhi for the first ever International Day of the Girl, Bhagwat went home and held his youngest daughter all night, weeping as he contemplated the three girls’ bleak prospects as child brides. The next day he told the facilitator who had led the screening about his restless night, and that he planned to re-enroll all three girls in school.

“When I saw Sikha talking to a large audience in Delhi, I was reassured to put faith in my daughters and invest in their future. I always wanted to see them prosper but doubted their capability and my ability to support them. I do not want them to ever [have] regrets in their life and get into the same vicious cycle of misery.”
– Bhagwat Thorat